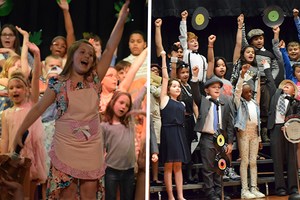 Northwest travels through time in "On the Radio," Southwest's "Wing It" tells story of birds learning to fly

Kindergarten through third grade students at Northwest and Northeast school hosted their Spring Shows during the week of May 6.

The students of Northwest entertained audiences with their production of "On The Radio," which highlighted some of the most popular songs of various decades from the 1920s to the 1960s. The NW show was directed by Music Teacher Maritza Rivera.

Southwest performed "Wing It," which told the story of four birds who did not want to learn how to fly. Throughout the show they learned about responsibility, and that it is OK to take risks and move on. The SW show was directed by Music Teacher Samantha Eberhardt.