Community goes wild for "One and Only Ivan" 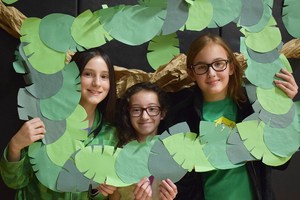 Evergreen Reads program concludes after successful second year filled with exciting events
The community of Evergreen Park started the year with “jungle fever,” jumping at the chance to read “The One and Only Ivan” and join the District’s Evergreen Reads program.
The end of March marked the conclusion of the second annual event, which is co-sponsored by EPSD 124 and the Evergreen Park Public Library. The community showed its enthusiasm for this year’s program early and often, proudly displaying Evergreen Reads yard signs in front lawns and participating in a number of book-themed events at the schools and the library.
Central hosted a fun-filled, jungle-themed dance that was well attended by the middle-schoolers, who enjoyed the book as much as the younger students. Elementary school families were invited to paint their favorite characters from the book during a Family Paint Night at Northeast School, and each elementary school was treated to a special assembly that featured a former zookeeper who worked with animals that were characters in the book — like Ivan, Stella, and Ruby.
The excitement of Evergreen Reads was not limited to special events. Community members shared pictures relating to the book on social media using #EvergreenReads, and those photos were shared on the new Evergreen Reads website, www.evergreenreads.com.
D124 students spent even more time with the book, completing various lessons relating to “The One and Only Ivan,” passing a stuffed Ivan from class to class, and completing journals tracking Ivan’s travels.