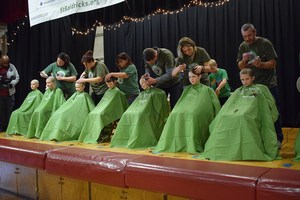 Three Evergreen Park School District 124 schools teamed up to raise more than $50,000 for the St. Baldrick’s Foundation through head-shaving events on March 16.

Central Middle School, Southwest School, and Northwest School each held fundraisers for the organization, which is charity committed to supporting research to find cures for childhood cancers.

Superintendent of Schools Dr. Robert Machak experiences the "Brave the Shave" event in a unique way: each year for the six years he has been the superintendent, Machak has shaved the head of Northwest School Media Aide Patricia Cronin during the Northwest School event.

"Pat is awesome; she is a very special friend and colleague to me," Machak said. "It means a lot to me that Pat has invited me to share this important part of her life with her. I'm honored; Pat had the chance to shave her head live on the WGN News last week, and turned them down so she could do it at Northwest with her family, friends, and students around her.”

Cronin, who has now shaved her head for eight years, said she began participating to honor three kids (20, 5, and 3 years old) she knew that were undergoing treatment for cancer.

“Sadly, the 20 year old passed away in 2012 because of cancer,” Cronin said. “The other two kids are now 10 and 12 years old and both have been NED (No Evidence of Disease) for more than five years. We need to do all we can to help find a cure for cancer."

Prior to the event, EPSD 124 parents and families collected donations for St. Baldrick’s in exchange for promising to shave their head. On head-shaving day, around 100 students (male and female), family members, and teachers shaved their head in support of the cause.

The vast majority of those who shaved their heads were students.

Third-grader Connor Sefcik said he participated because he “thought about the kids with cancer and wanted to give [his] hair and donate. Fifth-grader Vince Torrisi said he participated, “so [he] can give the money raised to the sick children so they have hair."

Of the three participating schools, Southwest School recorded the highest donation total of more than $30,000. Principal Patti Bogdan said that Southwest's students and their families have always been very supportive of this fundraising event.

"Whether they participated in St. Baldrick's by shaving, getting donations or supporting their peers it's just another example of how our students 'Choose Kind' and make a difference to support those in need," she said. "I'm very proud of the students and their families for making this selfless act of shaving and donations to support others."

The head-shaving was the main attraction on March 16, but it was just one of the many festivities of the day. Some schools welcomed in bagpipers and Irish dancers, while others sold Shamrock Shakes and offered the chance to “Pie Your Teacher” as an additional fundraising source. WGN News was also on hand to tape the head shavings.

While the afternoon transformed into a fun-filled event, Machak noted that it is the unifying power of the St. Baldrick's Foundation and its underlying cause that makes the day so special.

"It's wonderful to see the entire community come together for an event like this," he said. "There has been a lot of talk recently about a new spirit of student activism; our kids are front and center in this movement.  What I like is that their actions are truly having a positive impact.  I am really proud of them." Central Middle School teachers after being "pied" in the face.